New Britney! When I first heard “Do You Wanna Come Over?“, I thought “Britney doing Girls Aloud,” although actually the guitars are more “Sweet Dreams my LA Ex”; either way, this has something of the sound of mid-2000s British pop, the golden age of popism, a sound Britney didn’t embrace at the time (though there is the unreleased recording of “Graffiti My Soul” to speculate about). I didn’t like “Private Show” at all (I don’t know if it counts as a single, but if it did it would surely be Britney’s weakest), but the two songs from Glory released since then have been pretty good; obviously the release of a new Britney album is a stressful time, but the quality of “Clumsy” and now “Do You Wanna Come Over?” is making that stress more about anticipation than trepidation.

Dawn Richard’s new song “Cali Sun” is excellent, continuing the sharp snap back into focus of the Infrared EP, after she kind of got lost in the murk of Blackheart. I’m now very much looking forward to RedemptionHeart (which Wikipedia says isn’t out until the beginning of next year, sadly).

et aliae released an EP (which featured Dawn Richard) a few months back, and if anything is becoming even more delicate on “Feel Me.”

I liked The Saturdays a lot as a band, but I never paid much attention to the individual members (except that Frankie had the best haircut). So I wasn’t sure what to expect from Mollie King’s solo debut. Luckily, on “Back to You” she’s inherited the band’s talent for frostily emotional dance tracks (“caught up on all of my feelings” is a line I’ve been turning around in my head since I first heard it).

Milk & Bone are a bit twee; I don’t mean in the 90s Scottish indie way, I mean in the sense of affectedly sweet. And I guess there’s always going to be an element of subjectivity in deciding whether the performance of cuteness is endearing or aggravating. For me, comparing a lover to “good water pressure in a cold rainy summer,” as they do on their EP Little Mourning, falls on the endearing side. The faux-naif vulnerability of their new single “Natalie” comes a bit closer to my personal threshold, but the track is pretty enough to get away with it.

On the slightly poppier end of indie-synthpop, Nakita’s “Second Chances.”

We probably need more sympathetic appreciations of bad decisions, and the only genre we’re likely to get them from is country. That’s why “Let’s Pretend” is my favourite track from Kelsey Waldon’s (very well made, if mostly a little trad for my taste) album I’ve Got a Way.

CL (from 2NE1) has been in the process of making her US debut for a couple of years now. “Lifted” is billed as being her first US single, and the way she’s chosen to introduce herself to the US market is with… a reggae cover of “Method Man”?

I’m not precisely sure what it is about Raye’s EP Second (aside from Raye being from South London) that makes me want to describe it as grime influenced, because it’s obviously not grime. But there are all kinds of little details in the production that I can’t imagine would have been turned up on a pop record if it weren’t for the continuing (against all the odds, really) vibrancy of the grime scene. Perhaps this influence is most apparent in the jittery tension of “Shhh.”

You know how on every Lady Gaga record there’s at least one record where she just goes full musical theatre? And you kind of go with it because she obviously enjoys it, and she’s good at it, and anyway it kind of fits with her whole performativity schtick. Kaya Stewart’s self-titled album is a whole album of that song; and she’s fairly good at it, too (“Free Fall” is probably the best), but it really palls over a whole album. Which is why it’s a welcome relief when the album briefly swerves into 90s revivalism, with “Need U2B Mine,” which is a pop-R&B track straight from the Cheiron Studios songbook, and “With Your Love,” which could be an Eternal song. Or anyway, from a jukebox musical based on Eternal’s career.

I realise “like someone doing a slightly awkward impersonation of Kitten” doesn’t sound like a very positive description of a song, but it’s an accurate description of Hey Violet’s “Brand New Moves,” and captures why I like the song so much. The fake-it-till-you-make it aspect of swagger isn’t something that gets a lot of representation in pop music, but this song captures the feeling of having new moves that you haven’t actually tried out yet. The other tracks on the Brand New Moves EP are also good, and “Fuqboi” takes a more explicitly eliminationist line on fuckboys than I was anticipating.

Look at the cover art for Puro Instinct’s Autodrama and imagine what it sounds like. That’s exactly what it sounds like, except maybe even so. Well, that’s the case if you, like me, looked at that artwork and thought they would sound like a more shoegaze Kitten.

I described Moglii and Novaa’s EP Down Under a few weeks ago as a combination of indie synthpop and alt R&B; listening to Novaa’s solo tracks, I thought she was firmly on the indie synthpop side of the equation, but her new track “Sex” proves me wrong on that.

The Tide’s “Young Love” starts off like a slightly generic strummy boyband track, but at the chorus, they turn into the EDM One Direction we’ve been waiting for (the boring/banger progression is perhaps even more pronounced in their new track “Click my Fingers“).

I like that we’ve come to a point where I can describe a track as pretty as Porter Robinson and Madeon’s “Shelter” as a generic EDM banger.

The Official Chart for September 13

New Selena Gomez! I guess this is an album pre-order bonus rather than a single? It certainly sounds more like an album track, but it’s a good one, and it makes me even more excited about her new album (reminder that Stars Dance is a great album). When I heard that Selena’s new track was going to be […] 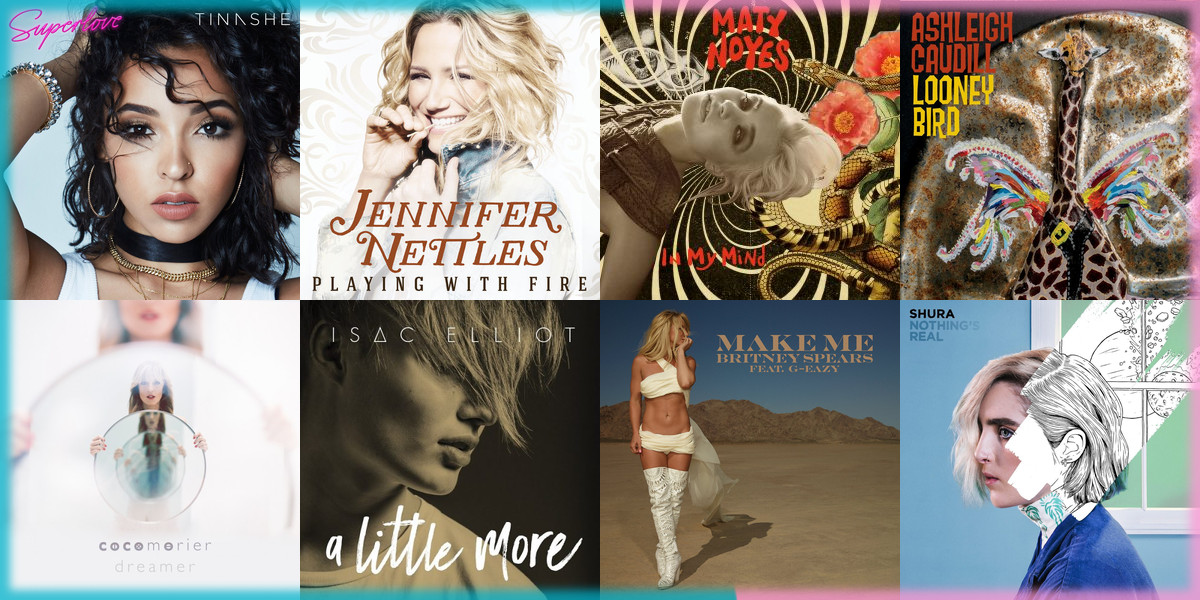 The Official Chart for July 17

New Britney! I was a bit wrongfooted because I assumed she’d come back with a banger, so I wasn’t sure what to make of this more downtempo track. I quite like it; actually, I like the verses and the bridge quite a lot (a new role for Britney to play: power-bottom-ney), but there’s something about the shift […]