END_OF_DOCUMENT_TOKEN_TO_BE_REPLACED

I like Reign. I like how the show is early-modern Gossip Girl, flagrantly unconcerned with history except as a stage for teen jealousies and romances. I like how everyone wears pretty dresses. And I especially like the Very Serious face that Adelaide Kane, as Mary Queen of Scots, pulls whenever she has to make a Morally Difficult Decision. There’s an episode of Buffy the Vampire Slayer where Faith, the evil vampire slayer, swaps bodies with Buffy, and Faith (in Buffy’s body) practices her impression of Buffy by looking sternly into a mirror and saying, “You can’t do that, it’s wrong.” I think of this exaggerated performance of tough virtue every time I watch Reign. END_OF_DOCUMENT_TOKEN_TO_BE_REPLACED

Supposedly, statistical studies of areas that have introduced abstinence-only sex education show that one of the most consistent effects is a marked increase in the numbers of teenagers having anal sex. I don’t know if this is true, but I hope it is, because it would be a great instance of the heteronormativity of these abstinence programs rebounding on itself. These programs involve saying “no” to a sex which is cast as necessarily involving a penis and a vagina, but the result of this obsessive negative focus on a heteronormative conception of sex might not be a rejection of sex, but a rejection of heteronormativity; a diffusion of sex into diverse and queerer forms. END_OF_DOCUMENT_TOKEN_TO_BE_REPLACED

I think I may be the perfect age for the appeal of the finely-tooled nostalgia of The Force Awakens. The obvious target for Star Wars nostalgia is someone like J J Abrams, who saw the original films in the cinema as a child; I was too young for that, growing up in the 80s after the films had left the cinemas, but before video recorders made it easy to watch the films at home. So I first experienced the films by catching bits of them when they happened to show up on TV, or, even more, through the clouds of content thrown off by Lucasfilm’s franchising efforts (I have particularly fond memories of animated C3PO and R2D2 buddy comedy Droids). This diffuse omnipresence played brilliantly into the mythical feel the films strive for. So it’s fairly unsurprising that I enjoyed the new film, but what I hadn’t expected is that the film quite clearly dramatises this condition of franchise-dependence, and also has some quite thoughtful things to say about it. END_OF_DOCUMENT_TOKEN_TO_BE_REPLACED 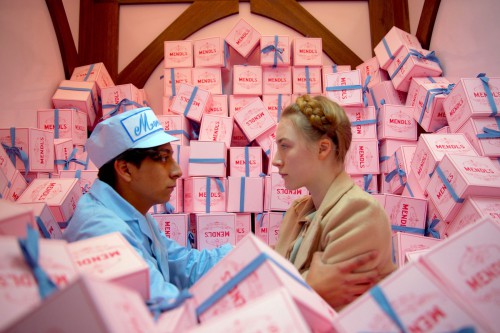 In the essay “Utopia as Replication”, Jameson suggests we consider Walmart as an example of how “the most noxious phenomena can serve as the repository and hiding place for all kinds of unsuspected wish-fulfilments and utopian fantasies”. Jameson intends this as a bit of a provocation, but I wonder if Walmart isn’t actually too easy a choice for the “paradoxical affirmation” of “what is most exploitative and dehumanizing in the working life of capitalism”. Walmart’s vastness of scale and remorselessness give it an aesthetic alibi, allying it with a tradition of modernist creative destruction which is likely to be attractive, at least to the sort of people who read Jameson. To really follow through Jameson’s project of unearthing the “utopian impulse”, we need to consider an aspect of capitalism that is not just exploitative but also in bad taste; for a certain strand of contemporary opinion, that would be “twee”, the kind of cutesily-retro faux-petit-bourgeois capitalism of cupcake shops and Cath Kidston. END_OF_DOCUMENT_TOKEN_TO_BE_REPLACED

Britney’s new song has been widely condemned as pure ideology; this piece in the Guardian is typical, arguing that the song reflects a contemporary, “religious” commitment to the value of work. That’s not what the song sounds like to me; it’s not so much capitalist ideology as capitalist id. While the official capitalist ethic proposes the necessity of hard work as the ground of equality, the capitalist id glories in the reality that you have to work while (indeed, because), capital doesn’t. Hence Britney’s imperious “work, bitch!” with the subtext that, work as hard as we like, we’ll never be as good as her; and doubtless we’ve all come to terms in our own way with the fact that we’re not Britney and never will be. But, if we follow the insight of the Neue Marx Lektüre that capital is the historical subject of capitalism, we might find in the id of this historical subject some useful indications of the mutations happening to the role of work in contemporary capitalism, and thereby come up with a more dialectical anti-work politics. END_OF_DOCUMENT_TOKEN_TO_BE_REPLACED