Facebook’s recent decision to ask people to inform on any of their “friends” who aren’t using their real names on the site is faintly surprising to me, as I’m not really convinced by claims that social networks have much to gain financially from knowing the legal names of their users. Isn’t Facebook’s use of data collection aggregative rather than individualizing? Marketers don’t care what I, as a specific individual, think or like, they care about how a network of “likes” connect to flows of money they can tap into. More generally, pace Bat, Bean, Beam, I don’t see why the “authenticity” of data would be important to Facebook, which is interested in what the population does, not who I think I am. This is why the idea that you could somehow get one over on Facebook by feeding them false data strikes me as rather quaint: you’re just giving them more data about the potential consumption decisions of the people who enjoy trying to fuck with Facebook (presumably they’ll try and sell you a copy of Adbusters).

I think Facebook and Google have, when asked about their real name policies, actually been telling at least a partial truth; they are interested, they say, in the idea that requiring people to use their legal names will change the way they behave on the site. This is supposed to be an unobjectionable attempt to get people to behave “better,” but isn’t the idea of behavioral modification by social media terms of service actually rather creepy? The data that Facebook collects is the site of most concerns about the site, but, while there clearly are cases where the information held by social networks, and its indiscriminate release, puts people in danger, most of the free-floating paranoia about social networks and privacy strikes me as overblown. However the reasoning behind the real name policy points to a different concern, which is not about what Facebook knows but about what we know, that is, how we might internalize our awareness that Facebook is watching in ways that change our behavior. In light of this concern, the description of social networks as “panoptic” is actually rather accurate. The point of the panopticon is not that someone is always watching; the panopticon could work even if no-one actually observing through it, because it functions by leaving inmates unsure as to whether or not anyone is watching, and thereby causing them to internalize the hypothetical inspection and judgment of the observer (more generally, the Foucauldian idea of power/knowledge isn’t about what people know, but about the ways in which particular ways of producing knowledge always involve particular organizations of power).

Anyway, the point of this post is to announce that I’ve set up a Facebook page for this blog. I notice through my own panoptic surveillance of how people arrive at this blog that some people are sharing posts on Facebook, and it occurs to me that those of you who use it might like to get updates about new posts via Facebook; if you “like” this blog’s Facebook page, you should start seeing updates from the blog in your news feed. I’ve also, slightly more problematically, added “like” buttons (and also “tweet” buttons) to each post. This does allow Facebook and Twitter to monitor your use of this blog, even if you’re not signed up with them; given the ubiquity of these buttons on other websites, I assume if you object to that you will already have taken steps to prevent it, but let me know if you’re particularly against the idea of these buttons showing up on this blog and I may change my mind.

People usually describe The West Wing as idealistic. This is reflected in what is taken to be the show’s signature directorial move, the “walk and talk,” in which two characters walk briskly through the corridors of the West Wing engaged in some high-powered discussion of the story of the week; this is a visual representation of the show’s commitment to the idea of the good that can be accomplished by energetic, intelligent, good people. But I always thought the heart of the show was in a slighty different move, that usually appeared towards the end of the episode. Again two characters, but this time usually static, in the muted light of an office somewhere out of the way; one character gives an impassioned speech to persuade the other of the moral rightness of some course of action, and just as this speech reaches its argumentative climax, the character breaks off and says, “but of course, we’ll never be able to implement that policy.” This reveals the cynicism which Žižek identifies as central to idealism: the idea, not just that good people sometimes do bad things, but that the “goodness” of good people is an internal, essential, quality untouched by any bad things they may by chance happen to do; indeed, the very distance between the bad actions and the internal goodness, perversely, comes to be taken as evidence of this internal goodness.

While The West Wing exhibits the cynicism of idealism, there is also a naivete of cynicism. Cynicism operates by revealing that, behind people’s actions lie their true, hidden, motives; but this just reproduces naivete at one remove, with a simple faith in the reality of these underlying motives. What I like about Political Animals is that it challenges this naive cynicism.  END_OF_DOCUMENT_TOKEN_TO_BE_REPLACED 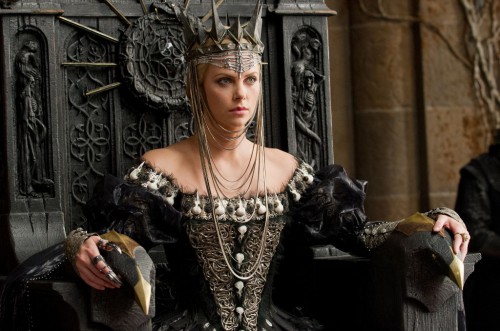 Snow White and the Huntsman is certainly not a “good” film, although some of the ways in which it isn’t good I find endearing. It’s in the tradition of genre films that don’t have much narrative coherence – events happen, but there’s little sense of why any event follows from any other, or of any lasting significance to any event after it is over. In this, it reminds me of a few films I’ve seen over the past few years of which I’m rather inexplicably fond, particularly Aeon Flux and Dungeons and Dragons (the “sequence of unrelated events” structure is particularly appropriate in this case, as that is the underlying structure of a game of D&D); but the film that’s really in the back of my mind, and which explains my attraction to these incoherent films, is The Neverending Story. END_OF_DOCUMENT_TOKEN_TO_BE_REPLACED