I think I liked Revenge more when it started as Gossip Girl meets The Count of Monte Cristo, before it turned into 9/11 conspiracy theorist Batman. The first season, in which Emily remorselessly enacted revenge on the family that framed her father, did have a war on terror connection, but it seemed properly post-9/11 in that terrorism was almost purely background (I initially thought, on the basis of some back-of-the-envelope calculations, that the terrorist event that formed the backdrop of the show took place in 2001, although it turns out there was an additional chunk of the timeline that puts it nominally pre 9/11). In the second season the terrorist attack becomes a more direct focus of the show, with Emily now targeting the vague conspiracy of politicians and businessmen who planned it (under the guidance of the man who taught her the Batman skills necessary to her quest for vengeance). 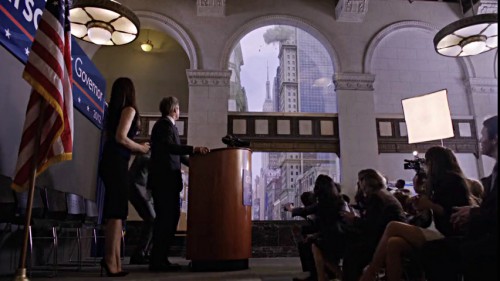 Still the show remains pretty great, and this change of focus does prove something I’ve been saying about 9/11 conspiracy theories for some time. As far as I can tell, it’s not, in the technical sense, true, that Bush did 9/11, but it might as well be: bombing Americans (not to mention non-Americans, of course) and setting up terrorist attacks are totally the sorts of things the US state does. But the fact that having conspired to bring about 9/11 wouldn’t actually be all that different in kind from events that the US government doesn’t bother to hide suggests that even if 9/11 truthers could prove their theories, most people would respond the way they do to these widely known events: with indifference. The widespread acceptance of stories that depend on fictional analogs of 9/11 conspiracy theories, it seems to me, confirms this; we already believe 9/11 conspiracy theories on some level, and we don’t care.

(Interestingly, another recent TV show that pays lip service towards Occupy’s 99% vs 1% rhetoric also draws on conspiracy theory themes. The villains in Arrow are a conspiracy of gentrifiers, led by a businessman and philanthropist who, following the murder of his family by criminals, becomes a costumed vigilante and and plans to wipe out crime by destroying a poor area of town through a natural disaster, in order to rebuild it. That is, Arrow does Revenge‘s “Bush did 9/11” plot one better, with a storyline that is basically “Batman did Katrina.”)

In switching to a broader terrorist conspiracy storyline, the second season of the show also increases the complexity of the plots. I increasingly found myself having to stop and think about who’s on which side now, and why exactly it is that they’re deceiving whoever they happen to be deceiving that week.  What I like, though, is that tracing the machinations of these plots always ends up with a curiously layered and hypothecated structure. A plot is put into motion to block some scheme from an opponent, but it turns out this scheme itself was only devised to stymie some imagined conspiracy of some further cabal, and so on. This is conspiracy theory as a burlesque of agency: conspiracy theories depend on the belief in all-powerful conspirators pulling the strings, but their structure of unmasking means that any agent we know about can never by the real agent, but only the puppet (the structure of conspiracy theories, that is, is the structure of the ambiguity in the word “actor”, meaning both one who actually does something, and one who theatrically pretends to do something). Revenge‘s charm is that, through the form of melodrama, it ties this conspiratorial structure of agency to a particular structure of affects. Everyone on the show is characterized by a remorselessness, a purely instrumental means-end reasoning which is itself an affect, an affect which erases the emotions that are nominally supposed to be motivating them: Emily’s desire to restore her father’s good name, or Victoria’s loyalty to her family. Again, what appears to be simple purposive behaviour (driven, even, by “natural” instincts, family and love) turns round on itself to become an indefinite deferral of motive.

Thinking about what this melodramatic structure might tell us about agency makes me think about recent calls for more centralized organization on the left. To be honest, I have difficulty taking these seriously (they seem to be such obvious compensatory mechanisms, theoretical defences against facing up to the actual failures of the left); I was tempted to describe them as “end-of-the-pier Leninism.” But then I thought perhaps end-of-the-pier Leninism is just what we need: a vaudeville Leninism that is self conscious about the entanglement of politics in melodrama and works through what that means for the possibilities of left-wing political agency (in this, Libby Anker’s recent article on “Left Melodrama” might be a useful starting point).

On Shia LaBoeuf and the Big Other

I saw Eagle Eye on the plane back from England; it’s not as good as Singh is Kinng, which I also watched, but it’s not bad (except for Shia LaBoeuf’s acting; he’s like an ugly Keanu Reeves). I thought there was something kind of interesting about the central premise, which involves the Boeuf receiving orders […]

One shouldn’t go around believing in them, of course, but I think there’s something to be said for the construction of conspiracy theories as a mode of political analysis; trying to come up with an entertaining conspiralogical explanation for events is a nice way of exploring the various interests and affects caught up in them. […]

“There is no big lie”

I didn’t watch Mad Men when it first started, which in hindsight is surprising, as I’m a big fan of both the advertising industry and the style of high Fordism. However, all the buzz I heard at the time amounted to a shocked “OMG THEY SMOKE AND ARE SEXIST,” and there are few things less […]