I saw Eagle Eye on the plane back from England; it’s not as good as Singh is Kinng, which I also watched, but it’s not bad (except for Shia LaBoeuf’s acting; he’s like an ugly Keanu Reeves). I thought there was something kind of interesting about the central premise, which involves the Boeuf receiving orders from some mysterious agency that appears to have complete control of all electronic systems; sending text messages, looking through security cameras, derailing trains. The falsehood of this premise is pretty obvious; there is no homogenous system of “electronic equipment,” but a vast range of unconnected and incompatible electronic systems. The vague category of technology provides a materialization of the paranoid fantasy that is the traditional support of the conspiracy thriller, but it’s not less (and, I would imagine, no less obviously) a fantasy for all that.

What I wonder, though, is if it isn’t functioning as a kind of displaced version of a further fantasy. You could interpret the all-powerful conspiracy, or, the seamless control of electronic devices, as a kind of metaphor for capitalism; the all-powerful agency, which doesn’t exist, represents the all-determining system, which does exist, in the form of capitalism. But Eagle Eye, by emphasizing the seamlessness of the fantasy power structure, made me wonder if that might not be, indeed, a fantasmatic element too. Is capitalism really seamless and all-determining? The truth seems more complicated: capitalism’s system manifests itself by not being systematic, by breaking society up into complicated  interconnecting parts. A truly radical conspiracy thriller, then, would have to expose the incoherence of the model of the conspiracy; perhaps 24 has been forced, by the pressure of producing 24 cliffhangers a season, into precisely this position. 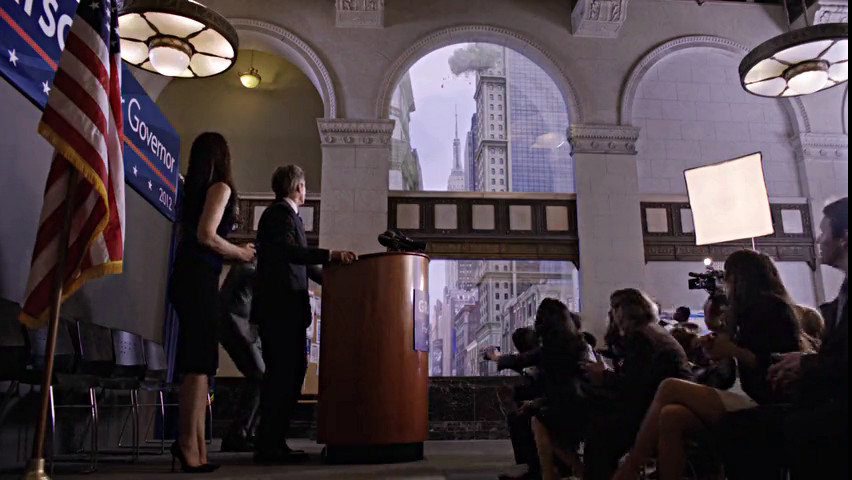 We need a Victoria Grayson of the left

I think I liked Revenge more when it started as Gossip Girl meets The Count of Monte Cristo, before it turned into 9/11 conspiracy theorist Batman. The first season, in which Emily remorselessly enacted revenge on the family that framed her father, did have a war on terror connection, but it seemed properly post-9/11 in that terrorism was […]

Just come across this quote from Hayek: The proletariat which capitalism can be said to have ‘created’ was thus not a proportion of the population which would have existed without it and which it had degraded to a lower level; it was an additional population which was enabled to grow up by the new opportunities […]