The New York Times describes Spring Breakers as “at once blunt and oblique,” although you might say the film spends half its time making a very obvious point and half its time not sure what point it’s making. Which doesn’t sound like much of a recommendation, but the film is actually pretty interesting. The obvious point it seems to be making at first is an analogy between the religious enthusiasm of Faith’s (Selena Gomez) evangelical church and the hedonism of spring break, emphasised by the similarity in the energized performances with which the minister encourages teenagers to get “crazy for Jesus” and the rapper Alien (James Franco) eulogises “bikinis and big booties.” If this were all the film were doing, it would be a fairly straightforward and indeed rather puritanical criticism of Schwärmerei. It would also justify interpretations of the films as entirely contemptuous of the characters and also the audience (who would be posited as a mindless Hollywood audience caught up in the hedonistic enthusiasm the film represents).

What makes the film interesting, though, is that it doesn’t just make this analogy the basis of a simple criticism: it takes this analogy seriously, or at least plays with it at length. It’s Faith, steeped in the dubious transcendence of church youth groups, who describes spring break as “the most spiritual place” she’s ever been, but the film-making seems to back this up. The bright colours, the visual and temporal distortions, skips and, repetitions, suggest  (the fantasy of) a spring break outside mundane time. This interesting review suggests the film is a “music video,” but I’m not sure that’s quite right. Rather, the film produces visually the affective structure of a dubstep track (or specifically of its theme tune, “Scary Monsters and Nice Sprites,” by some distance the best brostep track); sharply switching between an ethereal straining at the limits of reality and a brutal pulverising of it produces a kind of transcendence, or an aesthetic effect that hints towards transcendence, at least.

It’s in this combination of the highest and the lowest that the film takes the hedonism of the American dream seriously, seriously enough to consider its costs: to take these costs seriously is not just to make them the basis of a criticism, but to ask whether or not they might be worth it. When they arrive on spring break, the four women all say (as we all say on holiday) that they wish it could last forever, but they find that permanent transcendence is difficult to sustain. When Faith and later Cotty (Rachel Korine) leave, it’s not without regret – as Alien puts it, “if you go home, you’ll be at home.” Spring break is a place that’s not home, a utopia, and the question the film is interested in is, could human beings withstand utopia? And, if they couldn’t, should that lead us to reject utopia, or humanity? This is also the question asked by Platanov’s Happy Moscow, but the utopia Platanov is considering is the one proposed by Soviet communism, which we may feel some sympathy for (or at least the pathos of distance). Spring Breakers examines the utopia buried within capitalist hedonism, an uglier and at best ambivalent one.

That is, the film expresses what Tamás calls a “Faustian-demonic” view of capitalism, in which “the road to the end of capitalism (and beyond) leads through the completion of capitalism, a system of economic and intellectual growth, imagination, waste, anarchy, destruction, destitution.” Tamás explains this view mostly in reference to the “encomium” to capitalism in the Communist Manifesto, which is arguably not all that demonic, at least to the extent that it takes for granted that whatever the travails of capitalism we will get out the other side. That kind of optimism seems impossible to sustain today (there’s an argument that Marx gave it up after 1848), which leaves us looking for the outlines of a future past capitalism in the entrails of capitalism. If capitalism unleashes energies which are not so much productive as reconstructive, rebuilding us as something completely other, what kind of future is it building for this future-us, and will we survive it? Is our survival as humans even a relevant question, or is capitalism’s demonic virtue precisely in its destruction of the human? As Lyotard puts it:

Death is not an alternative to it, it is part of it, it attests to the fact that there is jouissance in it, the English unemployed did not become workers to survive, they – hang on tight and spit on me – enjoyed the hysterical, masochistic, whatever exhaustion it was of hanging on in the mines, in the foundries, in the factories, in hell, they enjoyed it, enjoyed the mad destruction of their organic body which was indeed imposed upon them, they enjoyed the decomposition of their personal identity, the identity that the peasant tradition had constructed for them, enjoyed the dissolution of their families and villages, and enjoyed the new monstrous anonymity of their suburbs and the pubs in the morning and evening. (Libidinal Economy, 109-10)

The linking of enjoyment and destruction shows the particular kind of transcendence being explored in the film: a hedonism which transcends the human condition by destroying it is the transcendence of the death drive. The death drive is that within us which transcends organic humanity, what keeps going beyond the limits of mere life. It’s what’s so uncanny and horrifying in Alien’s call for “spring break forever,” and it’s what’s lacking in the last shot we see of Cotty, slumped in a seat on a bus taking her back home (I assumed while watching the film that she was asleep, but it occurs to me now she could just as well be dead – from the point of view of the death drive, there’s no difference). And we see it in the last shot of the film, as Brit (Ashley Benson) and Candy (Vanessa Hudgens) drive away, somewhere. Their indecipherable expressions pose again the central question of the film, what it means and what it takes to survive transcendence: certainly something “keeps on” going in their commitment to the hedonism of spring break, but what is it, exactly, that has survived the remorseless pleasures of capitalism?

Mentioning Lyotard also points to the problematic gender politics of the film. It’s not “the perviest movie ever made”; it’s not even the perviest movie Vanessa Hudgens has ever made, but the fact that Zack Snyder and Michael Bay have really raised the bar for Hollywood perviness shouldn’t let other people off the hook. But the film does spend an awful lot of time sexualizing women’s bodies, and this isn’t just something that can be traded off against the potential thematic justification of this imagery; the instrumentalization of women’s bodies is integral to the point the film is making. The abjection and reconfiguration of the human body under capital is understood by the film in terms, specifically, of female bodies, and in this it is the heir to a long modernist theoretical tradition. Lyotard follows the passage quoted above with a depiction of the worker’s body in terms of “the prostitute’s vagina or mouth”; Benjamin discusses the late nineteenth century libidinal integration of body and machine in the image of the female cyclist with “the grim sadistic touch which made this ideal image of elegance so incomparably provocative to the male world in those days” (Arcades, B1, 2); we could even go back to the earliest days of mechanized capitalism in which male workers opposed mechanization because they considered working with machines effeminate, emasculating. Because feminizing, and through this aestheticizing, the place of the body in capitalism is a tradition and a trope, it may serve to obscure a problem with the Faustian vision of capitalism: that these demonic costs are not born by all equally. In one sense certainly Spring Breakers depicts this, but it also seems unaware of it, of the symbolic weight it is putting, willingly or unwillingly, on the bodies of young women.

If the film is unaware of the distribution of costs along lines of gender, it may be more aware of them in the case of race. At least, the film is hyper-aware of race, although it’s not always clear exactly what work race is doing in the film (it’s also complicated by the fact that Selena Gomez and Vanessa Hudgens aren’t white, but they aren’t Black either, and in America’s usually binary racial metrics that leaves a question mark over the race of the characters they play). The shift that takes place partway through the film between controlled party hedonism and a more clearly destructive hedonism is marked by a move from overwhelmingly  white beach parties to mixed but largely Black back streets, and it’s hard not to read Faith’s increasing discomfort and claims that she “didn’t sign up for this” as her having, specifically, not signed up to be around a bunch of Black people. But the dependence of this white partying on Black labour is at least suggested by the film, with Brit and Candy constructing the bad-girl personas they use in the robbery that funds their spring break through racialized speech patterns and the party itself fuelled by – again racialized – hip-hop music (while the more direct dependence on racialized labour goes unremarked – the hotels in which these parties take place are presumably largely staffed by people of colour, as are significant portions of the supply lines bringing the drugs too these parties). The film ends with the two remaining spring breakers shooting an island full of Black people; perhaps this is where the film’s ambivalence over the costs of transcendence explodes, splitting the machinic transformation of the body into two, as the glorious body confronts the abjected body. But who is abjected and who is glorious? The film’s scrambling of the two, or maybe just throwing them together like a dubstep drop, is messy and frustrating, but also a fascinating visualization of the terrifying possibilities that constitute our hopes in late capitalism.

I heard yesterday, with this post half-completed for a couple of months, that Antonioni had died. LA is beautiful. I’m not sure if that’s the point Antonioni is trying to make in Zabriskie Point, but he makes it anyway. And Death Valley, as it appears in the film, is beautiful too. What are we to […] 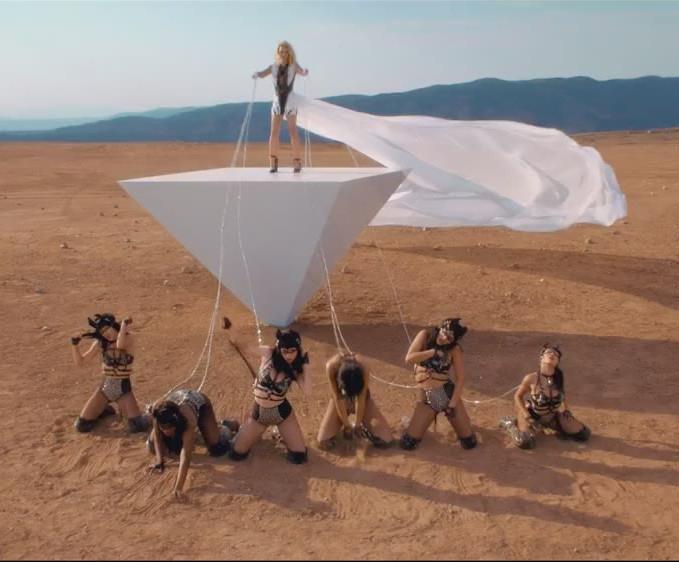 Britney’s new song has been widely condemned as pure ideology; this piece in the Guardian is typical, arguing that the song reflects a contemporary, “religious” commitment to the value of work. That’s not what the song sounds like to me; it’s not so much capitalist ideology as capitalist id. While the official capitalist ethic proposes the necessity of hard work as the ground of equality, the capitalist id glories in the reality that you have to work while (indeed, because), capital doesn’t.

You can’t even understand the lyrics

The sound film, far surpassing the theater of illusion, leaves no room for imagination or reflection on the part of the audience, who is unable to respond within the structure of the film, yet deviate from its precise detail without losing the thread of the story.… [Sound films] are so designed that quickness, powers of […]