“Yoü and I” is comfortably the worst song on Born this Way (well, on the standard edition; bonus track “Black Jesus / Amen Fashion” is basically everything bad that people who don’t like Lady Gaga say about her songs); an all too accurate re-creation of a dark period of early-90s MOR, painful for all of us who remember the 16-week reign of terror of  “(Everything I do) I Do it for You.” The video is good, though, following Gaga’s usual pattern of stitching together signifiers in the hope of creating some kind of theoretical life. My favorite thing about the video is the presence of Gaga’s drag alter-ego, Joe Calderone. Partly this is just because of a personal, erm, interest in women in masculine clothes, but it also brings up, or at least reminds me of, various questions about essentialism and gender.

With Joe Calderone, Gaga is playing the part of a guy, but not just any guy; he’s a sideburned, smoking, white-T-shirted James Dean sort of a guy. This is something that drag performances often emphasize – that there is no such thing as masculinity as such, but rather, any masculinity is always a particular masculinity (and the same goes for femininity too, of course). Interestingly, though, when I thought about this while watching the video, it wasn’t the contemporary philosopher of drag, Judith Butler, who came to mind, but Aristotle. Plato believes that the fundamental things that exist are the universals or forms: the dog, the chair, the man, and the things we encounter in the world exist only insofar as they resemble these universals. Aristotle rejects the possibility of these detached universals, arguing instead that forms are always particular; there’s no the dog, dogness only exists as it is embodied in this dog or that dog. 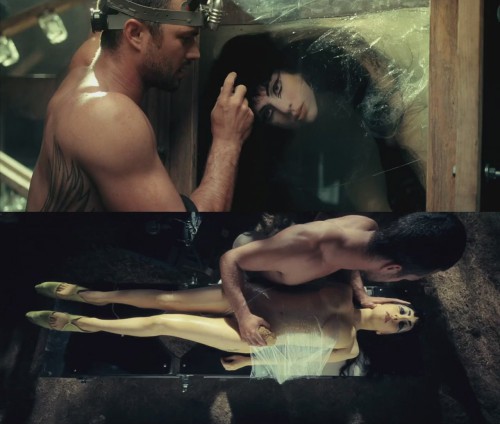 So, does this mean Aristotle’s theory of forms is an appropriate basis for a post-structuralist theory of gender? Well maybe. The “Yoü and I” video has a kind of bride-of-Frankenstein theme, with a somewhat sinister guy attempting to stitch together an artificial woman. But he fails to produce a viable woman; the failed artificial woman cannot live, and so must be killed. In Aristotelian terms, not all possible organizations of matter are genuine forms (or essences), capable of sustained existence in real particular things. Butler identifies the problem: the constraints on which forms are genuine and which are not “not only produce the domain of intelligible bodies, but produce as well a domain of unthinkable, abject, unlivable bodies” (Bodies that Matter, v). The problem isn’t, strictly, the theory of forms itself, though (indeed, unless we’re going to abandon intelligibility altogether, we are going to have to somehow distinguish between real and unreal forms); rather, the problem is the specific, and violent, imposition of particular forms in a particular social and political context; as Butler puts it, “which bodies come to matter – and why?”

The mermaid and the robot in Gaga’s video are two opposing poles of the abject, monstrous or chimeric body. The mermaid is natural and perfectly capable of existing, it just can’t exist in our world (on dry land). The robot is artificial, but seems to have, through a more self-conscious embrace of this artifice, willed itself into an existence that eluded the Frankenstein’s bride. I’m not sure if there’s supposed to be a narrative in the video, but I like the idea of a progression from mermaid, to Frankenstein’s monster, to robot; here, the very attempt to impose on the mermaid what is supposed to be the essential, and subsistent, female form, is what destroys her; but this destruction is canceled in the manifestation of a new, artificial form, the robot. What this reveals is the contingency of essence: which forms exist and are inhabitable is not pre-determined or knowable in advance, but depends on contingent processes of manifestation, processes of appearance which retroactively produce their own essence. This isn’t Aristotle’s position, certainly, but it seems to me that Aristotle’s emphasis on the particularity of form is a more useful place to start thinking about the problems of exclusionary intelligibility than positions which simply reject an unexamined “essentialism.”

There’s no such thing as a first draft

There have been a number of great posts recently at Object Oriented Philosophy about being a grad student and/or academic, and the writing process in particular; but this latest I find utterly incomprehensible: I sat down, and simply wrote it straight through. 12 pages. How long did it take? Geez, maybe 2 hours, maybe 3 […]

I wanted to find, the logic of all sex wars

As I understand it, radical feminism, particularly as developed by MacKinnon, is based on a binary account of power in which having, or not having, power, is what defines gender. It’s paradoxical, then, that one of the main criticisms radical feminists make of post-modern feminists is that the posties, in critiquing the idea of the […]

Feminism thus stands in relation to marxism as marxism does to classical political economy: its final conclusion and ultimate critique. I think this may be MacKinnon’s most exciting suggestion in Toward a Feminist Theory of the State. The idea of a critique of politics which would also in part be a critique of marxism seems […]