In the essay “Utopia as Replication”, Jameson suggests we consider Walmart as an example of how “the most noxious phenomena can serve as the repository and hiding place for all kinds of unsuspected wish-fulfilments and utopian fantasies”. Jameson intends this as a bit of a provocation, but I wonder if Walmart isn’t actually too easy a choice for the “paradoxical affirmation” of “what is most exploitative and dehumanizing in the working life of capitalism”. Walmart’s vastness of scale and remorselessness give it an aesthetic alibi, allying it with a tradition of modernist creative destruction which is likely to be attractive, at least to the sort of people who read Jameson. To really follow through Jameson’s project of unearthing the “utopian impulse”, we need to consider an aspect of capitalism that is not just exploitative but also in bad taste; for a certain strand of contemporary opinion, that would be “twee”, the kind of cutesily-retro faux-petit-bourgeois capitalism of cupcake shops and Cath Kidston.

We need, that is to say, a dialectical appreciation of twee. There is an indie lineage that runs from The Smiths to Keep Calm and Carry On posters, and we need to explain both how it is that The Smiths are David Cameron’s favourite band and how this lineage was the basis of a genuinely oppositional subculture (“twee as fuck”). Tom Gann suggests that the utopian core within twee is “gentleness”, which sounds right, or at least part of the answer, but I want to consider a couple of slightly different aspects, although ones which might end up themselves adding up to a certain type of gentleness. The occasion for my thinking about twee is having recently seen Wes Anderson’s The Grand Budapest Hotel. The film turns out to be in large part a painstaking defence by Anderson of his work, and, because Anderson is often criticised as twee, this defence is also inevitably a defence of twee.

One of the things twee is criticised for is “infantilization”, which is a term that deserves more thinking through; just throwing it out as an insult is a problem. What, exactly, is being criticized when we describe someone as infantile? Our primary cultural differentiation between children and adults is sexuality, which means that it’s going to be difficult to disentangle a criticism of “infantilization” from a claim that the “infantile” are at fault for failing to properly assume adult sexual roles. This mean, though, that the criticism that twee is infantilizing is bound up with a linear model of sexual development which is heteronormative. To abandon the infantile, that is, is to grow up, to grow along a linear path to heterosexuality, reproduction and family; growing up, that is, is defined as not “growing sideways” (as Kathryn Bond Stockton puts it in the title of  her book on the queerness of children). The rejection of this heteronormative model of sexuality as growing up is a core feature of twee in its oppositional forms (it’s no coincidence that a bunch of twee bands were formed in the late nineties, as Britpop congealed into unthinking laddism). 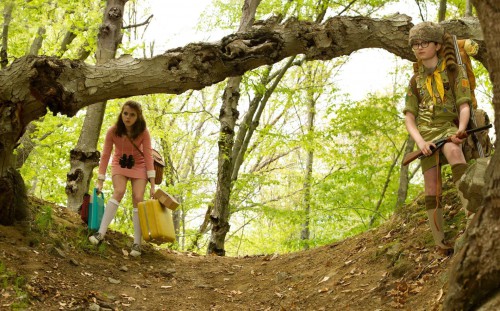 The queerness of childhood is one of the central themes of Anderson’s Moonrise Kingdom. The film is nominally a heterosexual love story, but that heterosexual frame underlines the queerness of the relationship at the heart of the film. Boy meets girl, but they don’t “do what comes naturally”; they don’t know what comes naturally, or what their relationship is. This denaturalization is well served by Wes Anderson’s film-making, particularly his often-remarked on obsession with sets, costumes, and props.  This is an erotics of objects in which sexuality is not directed towards its “proper” object, the supposedly natural heterosexual object choice. Anderson is instead interested in the sensuousness of artificial objects, the smooth coolness of bakelite and the scratch of polyester. In Moonrise Kingdom, this emphasis on the artificiality of sexuality (and with it sexuality’s non-linearity, its multiple possible orientations) appears in utopian mode. It represents this artificial sexuality as fully reconciled, of eros as a connection which might even involve the dissolution of the self in the world, rather than being a sphere of alienation. This reconciliation of the artificial and the natural makes Moonrise Kingdom a pastoral, in the specifically modern sense discussed by Marshall Berman, in which the alienation implied by humanity’s attempt to dominate nature is forgotten in an imagined harmony of artifice and nature (All that is Solid Melts into Air, 135-8).

This reconciliation of nature and artifice is both more explicit and more one-sidedly positive in Fantastic Mr Fox. The film is framed around the conflict between Mr Fox’s desire to be wild and his wife’s desire for domesticity, and it has been criticised for the gender stereotypes this reinforces. I’m not sure that criticism really has much bite, though, because this framing is introduced only to undermine it: as Halberstam says, the film “tells a tall tale of masculine derring-do in order to offer up some very different forms of masculinity, collectivity, and family” (The Queer Art of Failure, 184). The happy reconciliation of natural and artificial is made clear by Mr Fox in his triumphal speech at the end of the film:

The say all foxes are slightly allergic to linoleum, but it’s cool to the paw – try it. They say my tail needs to be dry-cleaned twice a month, but now it’s fully detachable – see? They say our trees may never grow back, but one day, something will. Yes, these crackles are made of synthetic goose and these giblets come from artificial squab and even these apples look fake – but at least they’ve got stars on them. I guess my point is, we’ll eat tonight, and we’ll eat together. And even in this not particularly flattering light, you are without a doubt the five and a half most wonderful wild animals I’ve ever met in my life. So let’s raise our boxes – to our survival!

Fantastic Mr Fox is a “tall tale” and so presents its reconciliation with a certain amount of amused irony; Moonrise Kingdom is, I think, ultimately a better film because its pastoral is more fraught, haunted by an awareness that reconciliation is achieved at best temporarily, if at all. This fragility, and the value of insisting on the utopia of artifice in spite of it, is the theme of The Grand Budapest Hotel. 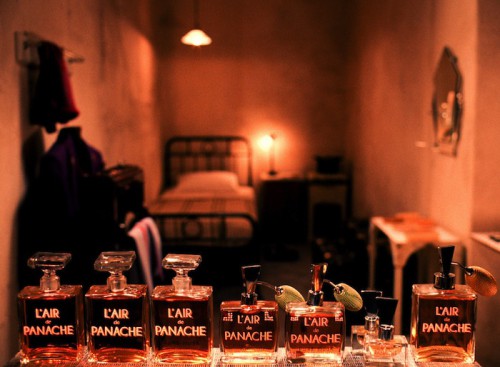 Watching the first few scenes of The Grand Budapest Hotel I was worried Wes Anderson had stooped to trolling his critics: the beautifully constructed doll’s house hotel set, complete with miniature funicular, is Wes Anderson at his most self-consciously Wes Anderson. As the film develops, however, it becomes clear that Anderson’s self-consciousness is not intended just to annoy his critics, but to refute them, through a (characteristically, painstaking) demonstration of what his films do and why that might matter. Where Moonrise Kingdom is a pastoral fantasy of the harmony of nature and artifice, The Grand Budapest Hotel is about the effort that goes into creating such an artificial harmony, and about the limits of these efforts. The main character, M. Gustave, is a hotel concierge who makes a profession of precision, as a legendary figure who arranges every last detail in the hotel to each guest’s satisfaction. He embodies this precision as personal poise, always perfectly turned out and smelling of his signature scent, “L’air de panache”. In this, Gustave is a rather pathetic figure, by which I mean both that he is ridiculous and that he inspires pathos. His poise has a too-obvious air of desperation to it: his poise is an attempt to construct a world because a constructed world is one that he can control; the fantasy is that a constructed world of beauty might be a defence against brutality. The film is aware that this is a fantasy and so, only a millimetre under the surface, is Gustave. The key image of the film, I think, occurs when Gustave is planning to dig his way out of prison. We see a procession of items being brought into the prison (a loaf of bread, a sausage) which each in turn the guard hacks with a cleaver to ensure they don’t contain any contraband. The guard only stops when some beautiful pastries are brought in which are so exquisitely decorated he cannot bring himself to chop them up; these pastries turn out to contain tunnelling tools for Gustave. Of course, the idea that cop would be so easily swayed by beauty is absurd; and, in any case, the tools hidden inside the pastries are themselves too beautifully miniature to dig through prison walls. But what the sequence captures is the utopian imagination that in some world things might be otherwise.

The process of attempting to establish a sphere of control through meticulously constructing a world is, of course, also Wes Anderson’s film-making process. The Grand Budapest Hotel shows us the value of this as a defensive gesture, which can at least for a time provide a buffer against brutality; it also shows us the limits of this aesthetic defence, and so is a utopian revelation of  another possible world, and a critical portrayal of our own.

Up to the minute film criticism

The Terminator (1984) and Terminator: Salvation (2009) make great bookends to neoliberalism. Terminator is about the rise of neoliberalism: a woman is hunted down by a representative of the future, a future manifest in a machine hidden within human flesh. This future seems unstoppable until, in the final scenes the fleshly machine is destroyed by the more honest […]

Interesting piece on the increasingly non-contemporary nature of post-modernism (via Warren Ellis):

Two bad reviews of The Dark Knight: bad in the sense that they’re poorly executed reviews, as well as being highly critical of the film. There are a number of annoying things about John Pistelli’s review, but the politically important one is the claim that: Batman, operating outside the law to protect the defenseless people, […]