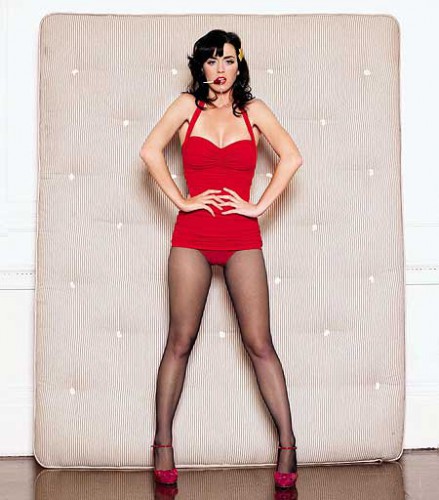 I read somewhere that, when Hugh Heffner first set up Playboy, he intended it solely as a lifestyle magazine, introducing men to fashion, interior design, culture, and other signifiers of the high life. The naked women, supposedly, were added when publishers were worried that a magazine about clothes and furniture would be perceived as too gay to sell. In a somewhat similar way, the pictures of women in lads mags are intended to signify heterosexuality, but to remain solely at the level of signification.

So, lads mags are the heir to a long tradition of putting sexy, as it were, in quotation marks, of saying arousing without actually being arousing. It’s an interesting form of performative that is intended to fail; a little like drag, perhaps, although “failure” of the gender performance in drag is more explicit and acknowledged. What, perhaps, made this seem so odd to me in the case of Katy Perry is the move of this kind of porn-in-quotes outside of its traditional location in softcore pornography. Perhaps the increased visibility of pornography with the rise of the internet created an increased space for a discourse that signified porn without quite being it (this would be the sense in which lads mags represent pornification). Is this space now itself becoming oversaturated, leading quote-marks-“porn” to move into different domains, with Katy Perry as its vanguard (there’d be something to be said, here, about her 50s cheesecake aesthetic, and the Cronenbergian horror that is the “California Girls” video) ?

Making sure sex is boring

“Surely there’s so much going on—” “That it’s deeply boring. An excess of boringness does not make something interesting except in the driest academic sense.” (Iain M. Banks, “The State of the Art”) It’s clear that the primary problem, both aesthetic and political, with contemporary pornography, is how boring it is. The particular boringness of […]

Steven Shaviro writes about post-celebrity celebrity while NBC is running trailers for the new American version of I’m a Celebrity, Get Me Out of Here (regrettably, due to the intervention of the courts, not starring Rod Blagojevich). The arrival of this show from the UK disappoints me a little; American TV, with the respectful celebrity […]

I should know better than to read Dissent Magazine

I should certainly know better than to read Dissent late at night, as I did yesterday with this article on the supposedly recent “politicization” of theory, because it’s hard to go to sleep when you’re really pissed off. The article starts off with the smug, incurious moralism that is characteristic of the magazine, with the […]