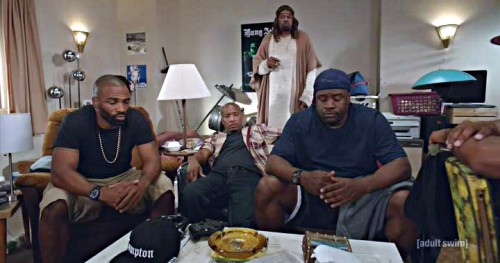 As it seems like no-one with more theological training is interested, it falls on me to consider the religious significance of Black Jesus. The curious thing about the show is that its biblical references are pervasive but ambient, half-meant rather than specific analogies. Much of the first season involves Jesus and his friends attempting to establish a community garden, and of course there are many biblical gardens this could be referencing, but the show never settles on any particular one. Or, maybe more obviously, one of Jesus’s friends is called “Fish,” and the one woman in his circle is called “Mags,” but the show is never clear on how far it wants us to take the analogy with Mary Magdalene (she’s not a prostitute, but she does get involved in a lot of Instagram beef; are we to read that as making her a sinful woman?). 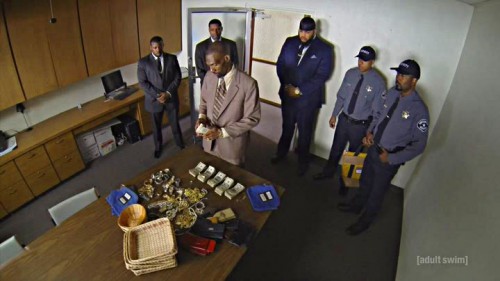 This wrong-footed me while I was watching the most recent episode, in which Jesus attends a church where the pastor aggressively extracts donations from the congregation on the pretext that they “Jesus gave you all his salvation, he deserves all your money.” As the camera lingered on a table on which the collection was stacked, I assumed we would soon see Jesus flip over the table, but no (although Jesus did later “turn over” the pastor in a different way, as the episode turned into an Ocean’s Eleven-style caper in which Jesus and his friends stole the money).

The effect of this scattershot approach to scriptural references is to make the religious seem ubiquitous; any element in the show could at any point temporarily become a biblical analog. This fits very well with the show’s general focus on everyday life, on Jesus and his friends dealing with the apartment manager or trying to scrape together money for weed. Indeed, although you would think that a show about Jesus existing in the present day would be about the end times, Black Jesus seems quite uninterested in revelation or the apocalypse; indeed I’m not sure I’ve heard anyone in the show use the phrase “second coming” at all. Which raises the possibility that this isn’t the second coming at all, that Jesus has been on Earth for 2000 years, just hanging out with small groups of the unfortunate. Or, perhaps, this is what the second coming is; the eschaton isn’t an event, it’s happening all the time, and the question is whether we notice it or not.

“There is no big lie”

I didn’t watch Mad Men when it first started, which in hindsight is surprising, as I’m a big fan of both the advertising industry and the style of high Fordism. However, all the buzz I heard at the time amounted to a shocked “OMG THEY SMOKE AND ARE SEXIST,” and there are few things less […]

The Guardian last week saw some particularly high-quality entries in the competition to write the stupidest thing possible about religion. Tobias Jones is terrified of “totalitarian” Richard Dawkins, who is apparently poised to carry out a genocide of religious believers. A. C. Grayling fights back, accusing homophobic protestors of “an obscenity against human rights” (whatever […] 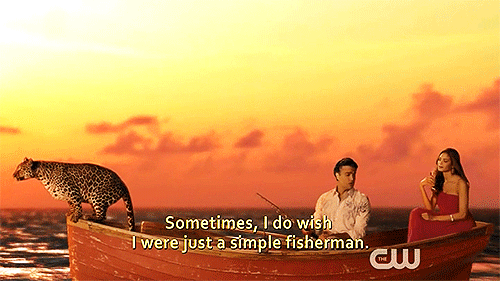