As Anwyn said at about this time last year, the idea of any one person listening to enough music to confidently list the “best” records of a year is implausible; music critics do at least have the obligation to try, whereas I don’t (and, looking at stuff like Pitchfork’s end-of-year lists, I felt extraordinarily relieved that I don’t listen to any indie music). So this is more of a list of things I liked last year that I don’t think I’ve written enough about.

First of which is my favorite track of the year, Sky Ferreira’s “One.” It does something kind of marvelous with the futuristic sheen that’s become omnipresent in R&B and pop music, making it break down, that is, represent technological breakdown. The vocals don’t just stick, they corrode, while the bright keyboard line sharpens to approximate shattering glass (reminiscent of an earlier track by producers Bloodshy and Avant, Britney’s “Piece of Me”). I imagine this is what it sounded like inside Goldman Sachs’s high-frequency trading computers on May 6. Everything else Sky Ferreira has done seems to be pretty awful (“One” wasn’t even released in the US, we got this dreadful Pink impersonation instead), but she’s apparently written a song with Klas Åhlund, so there’s some hope she’ll get close to producing more stuff this good.

Robyn may have boxed herself into a similar corner by making what is, as far as I can tell, a perfect record, “Hang With Me”:

Of course, a throbbing electropop tune and a melancholy vocal isn’t exactly new territory for Robyn, but in “Hang With Me” every last beat is in exactly the right place. The subtlety with which the apparently monotonous beat builds during the verse is masterful, with the payoff arriving as the song fizzes and explodes as the chorus starts. It’s also interesting to see how this changes the inflexion of the lyrics compared to the acoustic version, emphasizing the ambiguity of the “blissfully painful insanity” Robyn predicts. In the acoustic version, “tell me once again / how we’re going to be just friends” is bitterly sarcastic, predicting the inevitable heartbreak described in the chorus, but the musical rush of the single turns that around, with Robyn apparently committing to the pleasure of being  “reckless, headless” (and what a brilliantly apropos malapropism that is, combining “heedless” and “head-over-heels” so smoothly it didn’t even occur to me it wasn’t the right word until I saw it pointed out in reviews). This is emphasized in the video (especially in the bedroom/stage performance montage at 2:50), which also serves as a beautiful portrait of the perhaps soon to be dismantled infrastructure of post-war collectivity. Best video of the year? Probably.

Making a list of the tracks I’ve liked this year, Robyn’s Body Talk was probably the album the contained the largest number; this would certainly be true if you took the three Body Talk EPs as a whole. It’s interesting that this bold three-EP project ended up turning into two-EPs-and-an-album, suggesting that the album form isn’t as dead as we’ve been led to believe. Something similar is true of Janelle Monáe’s Metropolis project, originally intended as a series of EPs, but with the second two parts released together as her The Archandroid album. Alex Macpherson’s review of The Archandroid is a fine piece of music writing, which criticized the album for its theatricality, it’s adoption of styles and performances without any emotional connection. That’s precisely why I like the record, though; I’m suspicious of any music that doesn’t foreground its artifice. 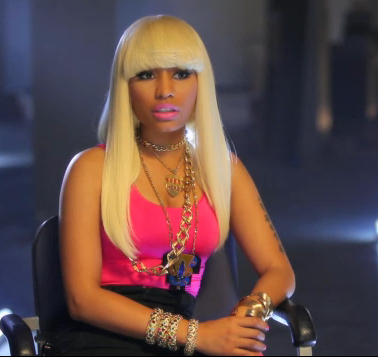 Theatricality is also important to Nicki Minaj, somebody I  don’t think I’ve gushed about sufficiently. As the picture above shows, she’s really quite adorable; actually, she’s way more adorable than that picture shows. There’s her habit of making ridiculous faces (a deliberate tactic, she says, to stop herself being seen as a sex object); her endless supply of slang; her role as benevolent aunt to her fans, the “Barbies” and “Kens” (like Lady Gaga, she’s managed to make pop a matter of filiation instead of, or at least as well as, consumption); her parodic inhabitation of gender norms in the hyper-gendered world of hip-hop (warning, this is an interesting video for an utterly awful song). Also, obviously, making great records. I’m a bit surprised that a lot of people seem to think that her debut, Pink Friday, isn’t a fantastic record. Yes, it’s not all as good as her guest spot on “Monster,” and “Right Through Me” isn’t very good, and “Check It Out” has will.i.am on it, but there’s so much good stuff on the album. “Roman’s Revenge” is spectacular, but I think a lot of people have missed the tracks where Nicki’s rapping is understatedly, effortlessly brilliant, especially “Dear Old Nicki,” in which Nicki narrates her career, conducts a conversation with herself, and explains her multiple personas, through some really great rhymes, without drawing attention to the incredible skill involved. Also there are some great beats; I particularly like “Save Me,” which reminds me of an old Streets remix (though Nicki’s part in the track is admittedly pretty forgettable), and “Blazin,” in which Kanye pulls one of my favorite happy hardcore tricks, pitching up a male stadium-rock vocal to sound like a house diva, and also gets comprehensively out-rapped, again, by Nicki.

Both tracks are examples of the ongoing, and as far as I can tell accidental, world domination of the hardcore continuum, with various forms of hardcore making up the default setting for hip-hop and R&B and, therefore, for most pop music. At the beginning of the year, we had the fantastic Oakland grime of J Stalin, and there’s also Berkeley group The Pack taking some influence from wonky, or whatever they’ve decided that microgenre’s called now (I know people don’t like the name “wonky,” but “dubstep” is a much worse name, and that doesn’t seem to have done the style too much harm). The Pack’s Lil B also has a fascinating and bizarre solo career, producing innumerable tracks including “I’m Bill Clinton,” “I’m a Princess,” and a personal favorite, “I Look Like Hannah Montana.” I guess if Drake is making hashtag rap, Lil B’s freestyles would be lolcat rap, employing the same kind of grammatical generativity as internet memes. But then there’s also stuff like this or his Rain in England album.

As far as pop’s adoption of hardcore tropes goes, my favorite might be The Saturdays’ “Missing You,” which renders rave synths enormous and looming, like icebergs crashing together. Its lyrics also contain a fine Lacanian analysis of drive and its relation to objet petit a: “I just want you to be / stuck in this circuit forever / so don’t freak out if I leave / I just miss, missing you.” The actual hardcore continuum has produced over 9,000 new microgenres that I have ignored, two pleasing sides of wonky have continued. In Ikonika’s hands, computer-game sound effects aren’t just nostalgic, but she manages to recreate in audio form the epic grandeur of 8-bit computer games, or which our imagination somehow managed to infuse into them. And Girl Unit continued to make dance music the transplanted home of crunk’s grandiose swagger.

I discovered a few things last year that I probably should have known about earlier; Nicki Minaj being the most noteworthy, as she’s been around, and awesome, for a few years. Someone else I’ve been sleeping on is Javiera Mena, who released her first album in 2006 (which I still haven’t heard), and a new album last year. She could be reductively, but not all that inaccurately, described as the Chilean Sally Shapiro, or, if we’re going to get into a slightly more involved neo-indie-italo taxonomy, Mena is somewhere between Shapiro’s icy melancholy and Doe Deere‘s popiness; “Luz de piedra de luna” is one of the poppier, and also best, tracks on the album. Something else I was late to was Rihanna’s Rated R, which I didn’t hear until well into last year. Her new album is not as good, although it’s pretty good and has one great track, “Man Down,” which I’m pretty sure is the best pop-reggae track since “All That She Wants.”  I’ve been surprised, though, that a lot of reviewers have described Loud as being lightweight and fun; compared to Rated R, sure, it’s more fun, but the overall tone of the album is still pretty uncomfortable, especially “Only Girl in the World,” which seems to be a come-on to someone with an unhealthy obsession.

What else was there? Pretty disappointing albums from Kelis and Shakira, though in both cases the singers’ distinctive voices made the songs less dull than they otherwise would be. Disney shelled out for slightly better songwriters than usual for Miley Cyrus’s and Selena Gomez’s albums; including, on the latter, Fefe Dobson, who has a new album of her own, unfortunately not as good as her unreleased second album (though I do like “Ghost”). And there were Lady Gaga’s videos, of course.

“I just need an ice-pick”

In other music news, the new J Stalin album, Prenuptial Agreement, is AMAZING. It’s the best hip-hop record I’ve heard in a long time, probably since The College Dropout. It’s great enough that there’s a rapper called J Stalin; it’s really icing on the cake that he produces tracks as great as, say, “Red and […]

I hadn’t realized that late-90s pop-R&B producers Stargate—responsible for such classics as “S Club Party” and Brandy’s version of “Another Day in Paradise”—were still in business. Actually, they’ve been keeping quite busy, but I only noticed when they turned up on Nas’s new album, producing anti-American anthem “America.” Not what I would have immediately expected […]